ACRL is able to award scholarships to academic and research librarians and library staff to attend the ACRL 2019 Conference thanks to donors like Trevor A Dawes. The association is strongly dedicated to equity, diversity, and inclusion, and the Scholarships Committee gives preference to applicants who are from diverse cultural/ethnic backgrounds, serve under-represented groups, and have not previously been awarded an ACRL scholarship. We invite you to invest in the future leaders of the profession as they seek to gain the experience, knowledge, and connections needed to advance learning and transform scholarship in the 21st century by contributing to the ACRL 2019 Conference Scholarship fund. To learn more about donating, please visit the ACRL 2019 website.

Trevor A. Dawes is the vice provost for libraries and museums at the University of Delaware, is a 2017-20 ALA Executive Board Member, and has been a Friend of ACRL since 2007. 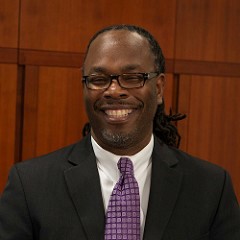 2. Why do you support the Friends of ACRL? The Friends of ACRL makes possible so many opportunities for ACRL members.  Professional development, scholarships, access to publications, advocacy and innovative programming are but some of these opportunities.  As is the case with any organization, member dues and other sources of revenue cannot support all that ACRL does for its members and I therefore feel a responsibility to support the association in this way.

3. What might someone be surprised to know about you? I think people may be surprised to know that I’m shy.  Although I describe myself as engaging (and I believe I am), I have been working diligently to be less shy — especially because of the positions I hold, within ACRL and at my place of employment. I think my efforts are paying off though.

4. Since you’ve become a member of ACRL, tell us about someone who influenced you in some way?One person who’s been very influential is Steven Bell, past president of ACRL.  There have been others certainly but especially in my year as vice president of ACRL, I was able to watch Steven effectively manage the Board meetings and discussions, respond to press inquiries, engage with members, and facilitate discussions at conferences and I have been impressed with the skill with which he does it all.  He definitely demonstrated some skills that I am trying to emulate — even though I’m adding my own personal touch.

5. What do you hope ACRL will achieve in the near future (or the long term)? As ACRL prepares for ACRL 2019, my hope is that our members (and non-members) will take this opportunity to give back — financially — to the association in order to ensure the quality programs and services ACRL provides can continue.  I also hope that ACRL will continue to develop and deliver the types of programs and services that will get even more members engaged which, in turn, can lead to an even more vibrant association.

6. In your opinion, what is the most important work that ACRL does? This is a difficult question because ACRL does so much work that is important to, and valued by, its members.  However, if I could select an umbrella term for the most important work, it would be that of advocate.  ACRL is a strong advocate for demonstrating the role that academic librarians play in student and faculty success. It does so though the development of standards; through offering professional development programs; and though connecting librarians with each other and with others in higher education who share a similar mission.