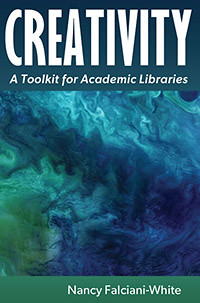 ACRL announces the publication of Creativity: A Toolkit for Academic Libraries by Nancy Falciani-White, a guide to understanding and developing creativity in yourself, your library, and your institution. Learn more about the book in this excerpt from the Introduction.

Creativity is a complicated concept that has a variety of connotations: for some, it’s fun, a little crazy, maybe unpredictable. For others, it’s disruptive, irritating, and perhaps even threatening. It is sometimes associated with the color blue. More seriously, because of its ability to add depth and breadth to experiences, creativity has been linked with a higher quality of life in the creative person as well as in those with whom they interact. It is essential for organizations, governments, and everyday life because it is integral to how we solve problems, reinvent ourselves, determine new ways to do things, or develop a new system, product, instructional technique, or e-resource management tool.

It has been suggested that creativity is essential to innovation and strategic planning in libraries.[i] It is because of creativity that we are able to move beyond the status quo and thus improve ourselves and our profession. As Mihaly Csikszentmihalyi stated in his foreword to the book The Nature of Human Creativity, the study of creativity is important because “it is not just about now; it is mainly about the future.”[ii]

I first became interested in creativity in 2006. I had recently changed roles within the academic library at which I worked, moving from a position as interlibrary loan coordinator to that of reference and instruction associate while completing my MSLIS degree. The library director asked if I would be willing to also do outreach for the library, something that hadn’t really been done there before. While I said yes, I found the prospect of outreach (which at the time I primarily associated with doing design work for posters and the library website) to be incredibly intimidating. Why? Because I cannot draw stick figures. My inability to express myself artistically had convinced me that I lacked the creativity needed to do outreach successfully.

In a panic, I began researching how other people do this kind of work. How do libraries do outreach? What is branding and how does it work? Where do ideas come from? In 2006 there was discouragingly little in the field of librarianship on this topic, and so I began exploring business and marketing texts about branding and promotion, desperately trying to find my way. Creativity was one of the topics I came across in my research. It was during this time that I began to understand that creativity is something that extends beyond the fine arts and that it really is possible to be creative in all areas of life. Although I had assumed that new ideas and innovations happened in all professions, I hadn’t thought of them as creativity. It was also during this time that I first began to consider the possibility that creativity was something that could be developed, rather than an innate ability (that I lacked).

I learned enough to be able to do outreach sufficiently and so turned my focus to completing my MSLIS degree and beginning work on an EdD in instructional technology. But the topic of creativity continued to surface in tangential ways such that I never fully stopped thinking about and being interested in it. While I was working on my dissertation, creativity appeared in connection with my analysis of the research practices of elite scholars. The similarities between research and creativity will be discussed in chapter 4, but what I learned from participants in my dissertation research served to reinvigorate my interest in creativity and connect it more firmly to my work as an academic librarian.

Completing a master’s and a doctorate in close succession had another creativity-related influence on me: For the first time in my life, I stopped reading anything I didn’t have to read. I felt my ideas becoming more discipline-specific, more predictable, and narrower in every sense, as I was absorbing professional and academic material almost exclusively. I didn’t fully recognize what was happening until I came up for air following the completion of my dissertation and reflected on the change. I have made it a habit to intentionally seek broad and diverse inputs ever since.

The purpose of writing this book is to share with other academic library staff what I have learned on my journey through marketing and business literature, psychology studies, and extensive reading. While I have tried to faithfully represent the findings and trends in each area, the literature presented here can only skim the surface of the research that has been done, as each chapter in this book could easily be a book in and of itself. This work is an example of the iterative nature of creativity. My knowledge in this area continues to grow and, as is frequently the case, the more I learn the more I identify areas of research that I want to explore. I submit this book at a point in time, but neither my journey nor my research in this area ends here. I expect my views will evolve over time as I continue to learn, and so I see this as an early iteration.

Just as it grew out of my personal experiences, this work is also a product of my professional context. I attended a liberal arts college for my undergraduate education and have worked at one ever since, for a total of now twenty years of experience in that context. While that depth of knowledge is certainly a professional asset for a library director at a liberal arts college, it is a limitation in terms of my ability to speak to the professional experiences of those in other contexts, such as those working at large state institutions or those who work within a union environment. This can be seen even in the development of the survey that I administered to collect data for this book. When I asked about institution size, my largest category was “greater than 10,000,” which I soon realized was laughable. My perspectives are also shaped by the fact that I am a white, cis-gender woman in a predominantly white, female profession. This has afforded me fewer barriers and more opportunities than may been available to others, as well as a safe environment to take risks and make mistakes that have allowed me to grow both personally and professionally. This book is available to you now in part because of those advantages.

This book is divided into two parts, the first dedicated to understanding creativity, and the second focusing on creativity in the context of academic librarianship. Chapter 1 begins by looking at psychology research in the area of creativity, exploring its history and areas of continuing research. This chapter also debunks common myths surrounding creativity. Chapter 2 explores the ideas of design thinking, innovation, invention, and entrepreneurship and how those ideas relate to creativity. These words are often used interchangeably, but is that actually appropriate? Chapter 3 looks at the impact that the physical and social environment can have on creativity, as well as specific considerations in the academic library context. Chapter 4 looks at common processes associated with creative thinking and research, examines the similarities between the two, and considers the implications of these similarities. Chapter 5 describes the findings of a survey administered in August 2017 to academic library staff asking about their understanding of creativity and their perceptions of creativity at work, including what supports their creativity and what barriers they face. Chapter 6 explores literature in library science, documenting abundant evidence of creativity in the field. Chapter 7 outlines strategies for enhancing personal creativity, and chapter 8 explores the impact of leadership on creativity and ways in which leaders can foster creativity in the workplace. Chapters 7 and 8 are structured so that each could be read on its own and the reader would learn a meaningful amount about creativity and how it can be applied in academic libraries. However, these chapters will be better understood in the context of the rest of the book.