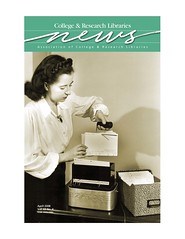 The April 2008 issue of C&RL News is now available online and in the mail. Technology. From the development of the printing press to the first telephone reference service to systems like the Zatocoder featured on this month’s cover to Web 2.0, librarians have had to figure out how to best use new technologies to serve our users.

A logical first step in dealing with a new technological landscape is learning. Librarians at the University of Michigan developed the “MLibrary 2.0” training program so interested staff members could discover Web 2.0 tools through structured play. A major theme of the Web 2.0 world is the individual as content creator and publisher. Daisy Benson and Selene Colburn of the University of Vermont took inspiration from the “Party photo phenomenon” and involved students in a promotional campaign for their chat reference service. At Georgia Tech, a contest to create short Flash animations promoted the library while appealing to student’s creativity. Jon Bodnar, Alison Valk, and Brian Mathews give an overview in “Challenging your students.”

Technology is also a major influence on the 21st-century workplace. In this month’s presidential theme article, Pat Hawthorne and Nicole A. Cooke use the work of futurist Mark Penn to discuss “Trendspotting and microtrends in academic libraries.” Jennifer Duncan provides a closer look at the life of a stay-at-home worker, one of the trends discussed by Hawthorne and Cooke, in her article “Working from afar.”

Make sure to take a look at all of the other great articles and columns in this issue as well, including Internet resources on Zoology, more profiles of 2008 ACRL award winners, and a fascinating look at the resolution of the AAAS/ JSTOR controversy in the Scholarly Communication column.