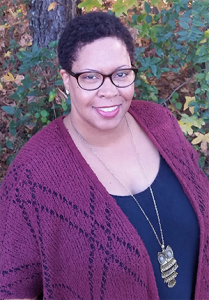 Kaetrena Davis Kendrick, associate librarian at the University of South Carolina-Lancaster Medford Library, is the 2019 Association of College and Research Libraries’ (ACRL) Academic/Research Librarian of the Year. The award, sponsored by GOBI Library Solutions from EBSCO, recognizes an outstanding member of the library profession who has made a significant national or international contribution to academic/research librarianship and library development.

Kendrick will receive a $5,000 award during the Middle Keynote session on Thursday, April 11, at the ACRL 2019 Conference in Cleveland.

“Kaetrena Davis Kendrick is a fully engaged and dedicated professional with her finger on the pulse of some of the most relevant and significant issues in academic librarianship today,” said Jennifer L. Fabbi, chair of the ACRL Academic/Research Librarian of the Year Award Committee and dean of the California State University-San Marcos University Library. “Her work in the areas of underserved and rural user populations, professional ethics, and morale in the profession are discussed widely and used in graduate library programs. Kaetrena is framing discussions influencing the future of our profession and the next generation of librarians.”

“This award has recognized librarians on whom I have modeled my practical and scholarly endeavors, and I am deeply humbled. I join them with a spirit of thankfulness and resolve,” Kendrick said. “Work in small and rural American academic libraries is often done under augmented constraints, and winning this award highlights and amplifies the positive, diligent efforts of librarians and library workers in these communities who help realize their campuses’ goals of teaching, research, scholarship, and service. Thank you.”

Kendrick exemplifies today’s academic and research librarian through her tireless dedication to the profession both at her local library and on the global stage. Working at a small academic library with only one other librarian, she has sought new and innovative ways to serve her campus community. Kendrick launched the Lancer Scholar Square, a local institutional repository, using open source software and implemented a Library of Things service that provides students, faculty, and staff with access to a range of circulating materials including tripods, presentation clickers, and virtual reality viewers. She additionally found creative ways to host a maker space in the library, using accessible and cost-efficient materials. All of these projects demonstrate Kendrick’s dedication to bringing national trends to libraries with limited resources.

Outside of her home institution, Kendrick’s service orientation is shown in a wide range of publications and presentations on topics including equity, diversity, and inclusion (EDI) in librarianship; professional ethics and workplace issues; and the challenges facing small and rural libraries. She shared the knowledge and insights she gained at the University of South Carolina-Lancaster with her peers as co-editor of the 2016 ACRL book The Small and Rural Academic Library: Leveraging Resources and Overcoming Limitations, featuring a mix of case studies and interviews written by librarians who share Kendrick’s commitment to transforming libraries through creativity and innovation.

Kendrick also shares her insights through contributions to the LIS research literature. Her 2017 Journal of Library Administration article “The low morale experience of academic librarians: A phenomenological study” is widely recognized as a benchmark study in this under-researched area of librarianship. She has also contributed research on EDI topics in several well-received articles including “The African American male librarian: Motivational factors in choosing a career in library and information science,” Behavioral & Social Sciences Librarian (2011), and international librarianship through works such as her 2014 IFLA Journal article “The experience of Korean academic librarianship: A phenomenological study.”

“I am delighted that Kaetrena Davis Kendrick has been selected to receive ACRL’s top recognition of an individual – the Academic/Research Librarian of the Year Award,” said ACRL Executive Director Mary Ellen K. Davis. “Her significant and influential research contributes to the development of academic librarianship and her dedication to her local community is equally impressive. She leads by example through a strong commitment to serving and uplifting traditionally underrepresented and underserved groups of all kinds, both on her campus and in the profession.”

Kendrick is the author of The Kaleidoscopic Concern: An Annotated Bibliography of Diversity, Recruitment, Retention, and Other Concerns Regarding African American and Ethnic Library Professionals in the United States (2009) and Global Evolution: A Chronological Annotated Bibliography of International Students in U.S. Academic Libraries (2007), both published by ACRL.

Before becoming associate librarian in 2017, Kendrick served the Medford Library as assistant librarian (2012-17) and librarian instructor (2012). She previously held positions at the University of South Carolina Aiken Gregg-Graniteville Library (2009-11) and the Georgia State University Library (2005-09).

Kendrick received her B.A. in English from Winthrop University and M.S.L.S from the Clark Atlanta University School of Library and Information Studies.

For more information regarding the award, or a complete list of past recipients, please visit the ACRL website.

The Association of College & Research Libraries (ACRL) is the higher education association for librarians. Representing more than 10,000 academic and research librarians and interested individuals, ACRL (a division of the American Library Association) develops programs, products and services to help academic and research librarians learn, innovate and lead within the academic community. Founded in 1940, ACRL is committed to advancing learning and transforming scholarship. ACRL is on the web at acrl.org, Facebook at facebook.com/ala.acrl and Twitter at @ala_acrl.

About GOBI Library Solutions from EBSCO

GOBI® Library Solutions from EBSCO offers over 15 million print and e-books to academic, research and special libraries worldwide. From streamlining workflows to partnering with library staff, GOBI Library Solutions is committed to providing the best solution for libraries’ acquisition, collection development and technical service needs. For more than 40 years, the mission has remained same—to partner with libraries in providing access to the broadest selection of scholarly content available. For more information, visit the GOBI Library Solutions website at: gobi.ebsco.com.