Editor’s Note: In the lead-up to the 2021 ALA/ACRL election, we’re profiling the 2021 ACRL Board of Directors candidates. We’ll feature one candidate in slate order each weekday from March 1-5. Complete details on candidates for ACRL offices are available on the election website. Make sure to vote for the candidates of your choice starting March 8. 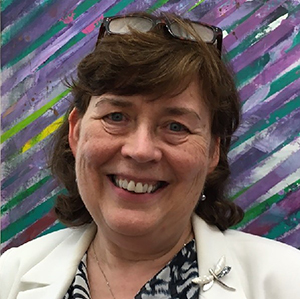 Mary Mallery, Ph.D. is the chief librarian and exec. director of academic information technology at Brooklyn College CUNY in Brooklyn, NY and a 2021 candidate for the ACRL Board of Directors as Director-at-Large.

1. Describe yourself in three words: Passionate about libraries.

3. What do you value about ACRL? I have been a member of ACRL for over 20 years, and from the first I loved the fact that I could ask anyone in any part of ACRL a question and get an answer that was relevant and helpful.  My first poster session at an ACRL Conference was such a validating experience as a new librarian and led to my first connection to a journal editor and ultimately publication.  It has been my honor and privilege to serve as a leader in ACRL both at the chapter and the Section level, and I value the friendships that I have made in my own backyard and across the country because of my work in ACRL.  Finally, one of my most invaluable ACRL member experiences was as a participant in the second cohort of the Assessment in Action initiative, where I learned lessons in the how, why and what of academic library assessment that I am still using to this day.  As a Director at Large member of the ACRL Board, I hope to sustain and help create more opportunities for such experiences for my fellow librarians.

4. What would you as candidate for the ACRL Board like to see ACRL accomplish in the area of EDI? There is so much to do, and I am glad that the ACRL Board has gotten started this year focusing on addressing implicit bias and especially racial inequities in the profession and in the membership. As Director at Large, I am happy to continue this work with the ACRL Board and encourage expanding mentoring and training opportunities for BIPOC librarians and staff in academic libraries.  Also, I would encourage broadening the EDI efforts to include advocacy and training in Universal Design in space planning for libraries as well as Universal Design in Education incorporated into the framework for information literacy.

5. In your own words: Before I was a librarian, I was an academic and a programmer and systems administrator.  When I started my library degree, the Internet was just beginning to show promise in connecting library resources to researchers.  I was lucky enough to start at Rutgers and work at the newly formed Center for Electronic Texts in the Humanities, where I could use my PhD in English literature and my programming skills as well as my new skills in Cataloging and Indexing to enable discovery and analysis of arcane works in the Oxford Text Archive and other developing troves of digitized primary sources. Today, we librarians are in one of the most exciting and innovative times in the history of scholarship and knowledge sharing, and we hold the keys to the kingdom.  Never forget that!

6. What are you reading (or listening to on your mobile device(s)? Right now, I am reading a few different books at once:  Resource Discovery for the Twenty-first Century Library: case studies and perspectives on the role of IT in user engagement and empowerment edited by Simon MacLeish; Buddenbrooks by Thomas Mann (the Helen Lowe-Porter translation); and the Richard Feynman chapter on “Los Alamos from Below” from Reminiscences of Los Alamos, 1943-1945 (published 1980). So many laugh out loud moments.  My favorite is on page 126:

“Well, Mr. Frankel, who started this program, began to suffer from the computer disease that anybody who works with computers now knows about.  It’s a very serious disease and it interferes completely with the work.  The trouble with computers is you play with them.  They are so wonderful.  You have these switches — if it’s an even number you do this, if it’s an odd number you do that — and pretty soon you can do more and more elaborate things if you are clever enough, on one machine.

And so after a while the whole system broke down.  Frankel wasn’t paying any attention: he wasn’t supervising anybody.  They system was going very , very slowly — while he was sitting in a room figuring out how to make one tabulator automatically print arc-tangent X, and then it would start and it would print columns and then bitsi, bitsi, bitsi, and calculate the arc-tangent automatically by integrating as it went along and make a whole table in one operation.

Absolutely useless.  We had tables of arc-tangents. But if you’ve ever worked with computers, you understand the disease — the delight in being able to see how much you can do.”