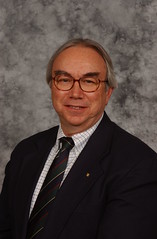 Douglas K. Lehman is Library Director at the Thomas Library of Wittenberg University in Springfield, Ohio.  Douglas has been an ACRL member since 1985 and is your ACRL member of the week.

2. What are you reading right now? I am currently reading Spoke, a biography of the great Cleveland Indians center fielder/manager Tris Speaker, and Rick Atkinson’s The Day of Battle: The War in Sicily and Italy, 1943-1944.

4. Why did you join ACRL? I joined because it is the library organization that provides programming, advocacy, professional development and support for academic librarians.

5. What do you value about academic or research librarianship? The interaction with students is what I value most. They keep me young.

6. In your own words: Having been doing this for thirty years now, I think first of how fast it has gone by. It is hard to believe that this many years have gone by. I’ve seen the profession move from circulation systems run on huge mainframes to the proliferation of not only PCs and Macs, but handheld devices, cell phones and an iPod in everyone’s pocket (except mine). Through it all though has been the sense of accomplishment that you get from working with the students in an academic library. The advent of the web has changed the nature of research and, while it sometimes feels that something has been lost by not using print indices very much, the amount of information at our fingertips is staggering.

Editor’s Note: Are you an ACRL member? Would you like to be featured as ACRL Member of the Week? Nominate a colleague? Contact Mary Jane Petrowski at mpetrowski@ala.org for more information.