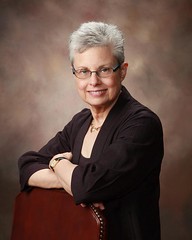 Paula T. Kaufman, Juanita J. and Robert E. Simpson Dean of Libraries and university librarian and professor of library administration at the University of Illinois at Urbana-Champaign, is the 2012 Association of College and Research Libraries’ (ACRL) Academic/Research Librarian of the Year. The award, sponsored by YBP Library Services, recognizes an outstanding member of the library profession who has made a significant national or international contribution to academic/research librarianship and library development.

“Paula Kaufman’s record of accomplishments is exemplary in many ways,” said John M. Budd, chair of the ACRL Academic/Research Librarian of the Year Award Committee and professor

in the University of Missouri School of Information Science and Learning Technologies. “She has been a distinct leader at several organizations and has been influential in every venue in which she has worked. Nominees and supporters uniformly extol her abilities to build consensus, to develop multi-institutional groups and to work with diverse and sometimes opposing bodies. She also has an outstanding record of publications and presentations through which she clearly communicated managerial, organizational and development topics.”

“News of having won this award came as a total surprise,” said Kaufman. “Being recognized by my colleagues is the greatest honor I can imagine. In turn, I must recognize that any success I have achieved is due to the privilege I’ve had to work with talented and caring people. I am very humbled to be joining the list of my many outstanding colleagues who have received this prestigious award in the past.”

Over the course of her career, Kaufman has made a significant impact on the profession through her extraordinary leadership abilities, vision and strategic thinking for the future of libraries, along with the generosity with which she shares her inspirations and insights. Her leadership of some of the largest academic research libraries in the United States has positioned her to engage directly with a wide range of issues facing libraries of all sizes and missions. Her positive and energetic approach to problem solving has benefited not only the libraries in which she has worked, but also the larger library community.

Her publications include seminal articles such as  “Library Value (Return on Investment, ROI) and the Challenge of Placing a Value on Public Services” in Reference Services Review (with Sarah Watstein, 2008); “The Library as Strategic Investment: Results of the Illinois Return on Investment Study” in LIBER Quarterly (2008); “It’s Not Your Parent’s Library Anymore: Challenges and Opportunities in the New Webs of Complexity” in the Journal of Library Administration (2007) and “Professional Diversity in Libraries” in Library Trends (1992). She has served on the Journal of Library Administration editorial board since 1995. Kaufman has additionally presented on topics including management, scholarly communication and library value at library and higher education conferences around the world.

Prior to joining Illinois as university librarian in 1999, Kaufman served as dean of libraries at the University of Tennessee, Knoxville (1988-99) and in a variety of positions including director of the Academic Information Services Group, acting head of the East Asian Library and business and economics librarian at Columbia University from 1979 to 1988.

Kaufman received her A.B. in Economics from Smith College in 1968, her M.S. in Library Science from Columbia University in 1969 and an M.B.A. in management from the University of New Haven in 1979.

For more information regarding the ACRL Academic/Research Librarian of the Year award, or a complete list of past recipients, please visit http://www.ala.org/acrl/awards/achievementawards/acrllibrarian.

About ACRL
ACRL is a division of the American Library Association (ALA), representing more than 12,000 academic and research librarians and interested individuals. ACRL is the only individual membership organization in North America that develops programs, products and services to meet the unique needs of academic and research librarians. Its initiatives enable the higher education community to understand the role that academic libraries play in the teaching, learning and research environments. ACRL is on the Web at http://www.acrl.org/, Facebook at http://www.facebook.com/ala.acrl and Twitter at @ala_acrl.