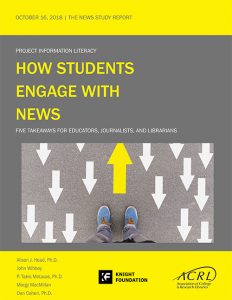 Project Information Literacy today released a new research report, “How Students Engage with News: Five Takeaways for Educators, Journalists, and Librarians.” Commissioned by ACRL and the John S. and James L. Knight Foundation, the report presents findings about how a sample of U.S. college students gather information and engage with news in the digital age. Six recommendations are included for educators, journalists, and librarians working to make students effective news consumers.

The study’s findings include:

The findings suggest young adults believe news is valuable to their lives and to society on the whole, and many see social media as an important channel for giving them a voice in the world. Yet, the new digital environment and current political reality has made successful navigation extremely difficult.

Learn more about the report in the free ACRL Presents webcast “Lies, damned lies, and news: How do today’s students stay informed and what can librarians learn from them?” on Thursday, November 8. Kirsten Hostetler and Margy MacMillan will discuss what the report findings mean for information literacy instruction.