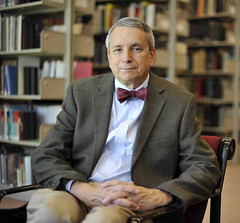 Robert A. Seal, dean of university libraries at Loyola University Chicago, is the 2015 ACRL Academic/Research Librarian of the Year. The award, sponsored by YBP Library Services, recognizes an outstanding member of the library profession who has made a significant national or international contribution to academic/research librarianship and library development.

“Bob’s impressive record of leadership in academic libraries was reflected in the letters from colleagues across the profession supporting his nomination,” noted Tyrone Cannon, chair of the ACRL Academic/Research Librarian of the Year Award Committee and university library dean at the University of San Francisco. “Bob’s spirit of collegiality, support for colleague development, resource sharing on the global stage and his articulation of the importance of the 21st century learning commons which places academic and research libraries at the center of higher education, underscored the committee’s choice.  Bob truly epitomizes the ACRL Academic/Research Librarian of the Year.”

“Needless to say, I am humbled and honored to be named Academic/Research Librarian of the Year by ACRL,” Seal said. “I have been fortunate throughout my career to have had wonderful mentors and colleagues who have helped me along the way and from whom I have learned so much.  This is without a doubt the most important recognition an academic librarian can receive and I am grateful to my staff who nominated me and to the committee for their decision.”

Over the course of his career, Seal has demonstrated his commitment to developing the academic library in a number of ways. Known as a staunch advocate for international library cooperation, his ability to share information in a bilingual environment has made Seal a strong advocate for breaking down barriers and extending partnerships between libraries in the U.S. and Latin America. In addition, Seal is recognized both as a strong, visionary leader and as a caring mentor to new and experienced academic librarians. Having led libraries at a number of institutions, he is widely known for his commitment to hiring and developing innovative staff along with recognizing their contributions to the library and campus communities. Seal’s focus on developing human, along with physical, resources has earned him a reputation for re-envisioning the academic library.

One of Seal’s major accomplishments is the planning and construction of the LEAF award-winning Loyola University Klarchek Information Commons. He was the driving force behind the development of the commons, which serves as a model of “green” library buildings and as a hub of student activity and learning on campus. Situated on the shore of Lake Michigan, the commons optimizes the advantages of its natural setting to provide an environment conducive to the highest levels of intellectual attainment. Under Seal’s leadership and commitment to community engagement, the Klarchek Information Commons has placed the library at the heart of Loyola’s campus life and serves as an inspiration for similar projects at other institutions in Chicago and beyond.

“Bob’s outstanding work in developing the information commons model, along with his truly global focus, demonstrate important contributions to the profession and academy,” added ACRL Executive Director Mary Ellen K. Davis. “I am inspired by his sense of community and commitment to teamwork and collaboration. Bob epitomizes the innovative, visionary spirit of the academic and research library community.”

He has an extensive publication record in the area of resource sharing, among other topics, including “Interlibrary Loan: Integral Component of Global Resource Sharing” in “Models of Cooperation in U.S., Latin American and Caribbean Libraries” (2003), “International Interlibrary Loan: Key Component of 21st Century Resource Sharing” in Resource Sharing and Information Networks (2002), “Reference 2001: A Director’s Admonitions” in portal: Libraries and the Academy (2001), “Mexican and U.S. Library Relations” in Advances in Librarianship (1996), “Academic Branch Libraries” in Advances in Librarianship (1986), and “Circulation Service Desk Operations: Costing and Management Data” in College and Research Libraries (with Pat Weaver-Meyers and Duncan Aldrich, 1985).

An active member of ALA and ACRL, Seal also demonstrates his global view through being an active in the International Federation of Library Associations (IFLA), where he served as treasurer of the Document Delivery and Resource Sharing Section from 2008-13. He additionally served as a member of the OCLC Board of Trustees from 2004-10 and was a long-time member of the OCLC Members Council, culminating in a term as council president from 2003-04. Seale has been a board member of the Chicago Collections Consortium since 2012, currently serving as the group’s treasurer. He further demonstrated his commitment to sustaining the future of librarianship by serving as a member of the Dominican University Graduate School of Library and Information Science Advisory Board from 2006-14.

Seal received his B.A. in Astronomy from Northwestern University (1971) and M.L.S. from the University of Denver (1972).

About ACRL
The Association of College & Research Libraries (ACRL) is the higher education association for librarians. Representing more than 11,000 academic and research librarians and interested individuals, ACRL (a division of the American Library Association) is the only individual membership organization in North America that develops programs, products and services to help academic and research librarians learn, innovate and lead within the academic community. Founded in 1940, ACRL is committed to advancing learning and transforming scholarship. ACRL is on the Web at http://www.acrl.org/, Facebook at http://www.facebook.com/ala.acrl and Twitter at @ala_acrl.