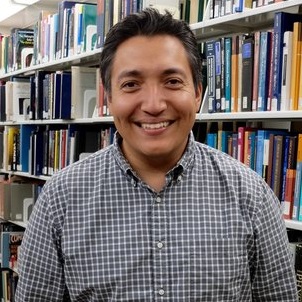 George Martinez was the Diversity Residency Librarian in Ekstrom Library at the University of Louisville. The residency is a maximum of two years and George was the resident from September 2015 – July 2017. He is currently the Student Services Librarian at CSU Long Beach.

Tell me a little bit about your background. Where did you attend college? What degrees do you have? What programs (undergraduate or graduate) prepared you for your current position? Tell me about your position and what you do?

I received a B.A. in Drama from UC Santa Barbara and an M.A. in Educational Theatre from New York University. Before I began pursuing a career in librarianship, I taught secondary school English and worked in museum education. While I was working on my M.L.S. with a specialization in E-Government online through the University of Maryland, College Park, I began working as a library assistant in a public library and doing internships in academic libraries. During my time as the Diversity Residency Librarian, I worked in the Research Assistance and Instruction department where I taught various information literacy workshops and met with students for research consultations.

What caught your interest about the residency that you were a part of?

The residency at the University of Louisville caught my attention because it’s targeted at people new to the profession, which meant there were a lot of opportunities to work on new projects and learn the foundations of librarianship within a reference department. The residency also offered opportunities to publish in academic journals and present at library conferences. The collegiality of the Research Assistance and Instruction department was also very evident during my interview and working with them proved to be a fantastic collaborative experience.

When I began library school, I knew that I wanted to work in an academic library, but finding a position in California seemed extra competitive. I think being willing to move to Kentucky allowed me gain the experience I needed in order to have more flexibility in terms of where I wanted to work.

How was the residency or job application process for you?

The residency application process was my first time going through the academic interview process and it was stressful! However, the University of Louisville libraries did a great job of keeping me in the loop and their search for a new resident was efficient. After I had a phone interview, I was invited to campus for an interview. I had dinner with librarians the first evening I arrived and that was followed by a full day of interviews that included an instruction demonstration. Although the day was long, they were great hosts and made my day as easy as possible.

Do you have any comments or advice for current residents?

I suggest looking at job announcements for positions that you might want to have in the future. Next, use the posting to help you determine what skills you would like to gain during your residency. It’s also important to come to the residency willing to learn and ready to listen. In some cases, it can be easy to judge the way a library does certain things, but there is often a history behind these decisions that we need to learn before we offer suggestions about how to improve.

How are you becoming or staying involved with the wider profession?

I keep my eye on opportunities that pop-up via listservs. Currently, I’m on ALA’s Over the Rainbow Book List Committee, which creates an annual bibliography of LGBT books aimed at adults. It has been interesting to work with librarians from all over the country and get more experience actively participating in ALA.