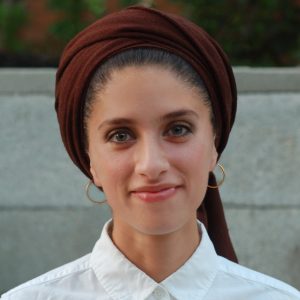 Urooj Nizami was the Resident Librarian at the Temple University Libraries from August 2017 – August 2020. She is currently the Open Education Strategist at Kwantlen Polytechnic University.

Tell me a little bit about your background. Where did you attend college? What degrees do you have? What programs (undergraduate or graduate) prepared you for your current position? Tell me about your position and what you do.

I grew up in Toronto and went to McGill University to study Sociology, Middle East Studies and Jewish Studies. During my time in undergrad, I became involved in student activism where I was introduced to community-led research efforts and alternative modes of knowledge production. This really shaped my commitment to emphasizing research that is for communities and by communities. These experiences were accompanied however, with a realization that a lot of research meant for the public good exists only behind a paywall, rarely making it into communities that could benefit from its results or even who were instrumental in producing the research in the first place.
Like many others completing a liberal arts degree, I entered a job market that put little value on the skills I’d gained in university. After graduation, I worked in a community organization for a year before enrolling in a master’s program in the School of Information Studies, also at McGill University.
During my last year of library school, I enrolled in a practicum with two exceptional mentors: Deena Yanofsky and Michael David Miller. They leveraged my interest in community knowledge production to introduce me to the world of Open Access publishing. We worked on a project centering student-led academic journals. My practicum was the highlight of my Library School experience. They exemplified the very best of what a nourishing mentoring relationship can be and they set the bar high for subsequent work experiences in the field. I wish everyone had such a fulfilling experience with their introduction to the library world. I now know this isn’t the case for many, and I strive to be like Deena and Michael in my own practice as a librarian.
Another generative experience from Library School was the research project that I conducted, entitled, Misinformation and Disinformation: A case study of Muslim perceptions of news media.
When I joined Temple University Libraries, I took leadership of the longstanding Textbook Affordability Project started by Associate University Librarian, Steven Bell, with a focus on uniting various library and campus constituents around Open Education including using primary sources and public domain materials from our special collections and archives. Director of Special Collections, Margery Sly, was hugely encouraging. I also benefited from the mentorship of the many liaison librarians and special collections colleagues who supervised various stages of my residency and collaborated with me on introducing new ideas and developing projects in the libraries.
In my current position as Open Education Strategist, I’m once again lucky to be working on Open Education efforts with encouraging and collaborative colleagues who are incredible advocates for students.

What caught your interest about the residency that you were a part of?

In all honesty, I wasn’t too familiar with the long history of library-residency programs when I applied to Temple University. It was one of many applications I sent off in an unkind job market. My first job after library school did not pay a living wage and I was applying widely to find work that was both in the field and that would compensate me fairly. After becoming more familiar with the residency program, I understood it to be an opportunity to sharpen my skill set towards a permanent position. Getting the position was incredible, but I would be remiss if I didn’t add that it was sometimes riddled with anxiety too. As many others have observed, the relatively short-term residency appointments speak to broader issues about diversity in hiring, the rise of contract positions, and the issues faced by early-career folks working at the margins of traditional library hierarchies.

I was interested in open access work centered in academic libraries. Essentially, I wanted a position where I could work in line with my personal values around correcting power dynamics that leave people and communities without the information that they help create, but don’t end up having access to.

How was the residency or job application process for you?

It was a challenging interview, but really prepared me for the academic job market. It was a marathon, day-long interview that consisted of multiple parts. I had to give a job talk and answer colleagues’ questions, meet with various library constituencies for interviews, including the Dean of Libraries. I also went to lunch with some of my future colleagues and the then library resident.

Do you have any comments or advice for current residents?

Harness the benefits of the residency in every way possible! One thing I did that I would enthusiastically recommend looking into was getting a second master’s degree. Part of my benefits package at Temple Libraries included tuition remission. I was able to complete a Master’s in Religion in three years while in my residency at minimal cost to me. I also collaborated with my colleagues on research projects and had the benefit of presenting at international conferences. I can’t imagine the additional difficulties of being a resident or in any precarious position during this global pandemic. So, the advice I have may not even apply to the present conditions. I am always open to speaking with current residents and thinking creatively if folks want to reach out personally.

How are you becoming or staying involved with the wider profession?

This is a question that I have struggled with. Oftentimes staying involved with the wider profession takes place on the margins of a day and comes at a personal cost. I am introverted and also steadfast in maintaining a healthy work-life balance. I truly believe there are alternatives to the traditional ways of staying involved. I have learnt to accept what I am comfortable with and right now that means listening, collaborating, and learning from my immediate colleagues. For now, that is what my capacity allows for.