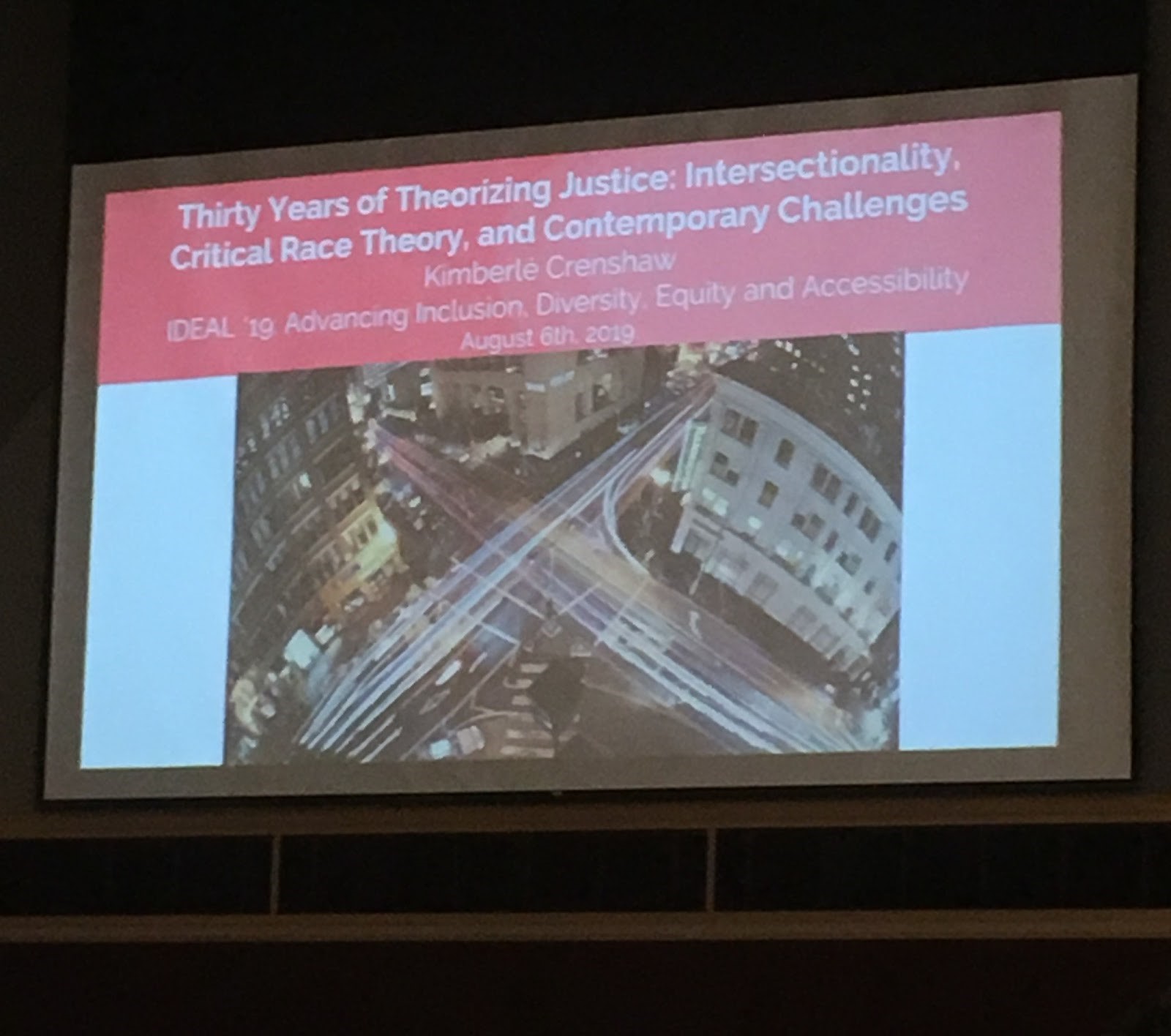 Second Image: Nikole Hannah-Jones speaking as the closing keynote of the conference. The projected slide behind lists a timeline illustrating how slavery was a foundation upon which the United States became a nation.

It seems Ohio was the place to be this spring/summer! About four months after the conclusion of the Association of College and Research Libraries’ (ACRL) biannual conference in Cleveland, Ohio, ACRL and the Ohio State University Libraries teamed up to present the IDEAL ‘19 conference in Columbus, Ohio. Advancing Inclusion, Diversity, Equity, and Accessibility in Libraries and Archives (IDEAL), formerly known as the National Diversity in Libraries Conference, highlighted work being conducted across libraries, archives, and museums that speak to the importance of diversity and inclusion within library work. As my first time attending this conference, I sought to be an active participant by sharing my own scholarship, interacting intentionally with other attendees, and learning as much as I could.

This session was presented by Bibiana Lopez and David Ramos-Candelas, both Undergraduate Peer Research Coaches, along with Chelsea Heinbach, Teaching and Learning Librarian, and Rosan Mitola, Outreach Librarian from the University of Nevada, Las Vegas (UNLV). This interactive presentation focused on dismantling the deficit-based thinking that often guides new initiatives or ideas to “help” underrepresented groups. For example, a common deficit-based approach is to note that first-generation students may struggle to understand where to get help, as it can be difficult to navigate institutional departments, from financial aid to advisors to office hours.

The session encouraged a strengths-based approach to research and did so by presenting the findings of a community-based participatory research study conducted by the UNLV research team. The research team was led by five Mason Undergraduate Peer Research Coaches, all of whom also identified as first-generation students along with librarians Chelsea Heinback and Rosan Mitola. Their findings flipped the narrative of first-generation students being “at-risk” and focused instead on a strengths-based approach, building on research conducted by Chelsea Heinbach, Brittany Paloma Fiedler, Rosan Mitola, and Emily Pattni regarding the experiences of transfer students in academic libraries. The findings of the research team took my earlier deficit-based example approach and focused not on a lack of knowledge of institutional departments, but instead on the motivation and independence that first-generation students demonstrate in navigating this process on their own.

The link above provides access to the entire presentation, and I highly recommend it. I, as a first-generation student, definitely focused on all of the things I lacked, and this, in turn, influenced how I approach my own research as well. Focusing on the strengths students bring celebrates their backgrounds and reinforces messaging that they belong on our campuses and in our classrooms.

Led by the Residency Interest Group’s Programs and Proposals Committee, this session was a roundtable discussion open for residents and residency coordinators to discuss best practices in building a residency program. Resident Librarians who attended spoke on their experiences as residents, and a list of resources was provided via the online scheduler software. One particular resource that was highlighted was the book Developing a Residency Program: A Practical Guide for Librarians by Lorelei Rutledge, Jay L. Colbert, Anastasia Chiu, and Jason Alston.

Participants discussed questions that delved into areas where residents, particularly Diversity Alliance residents, have prominently noted issues. These included questions such as: “What limitations might residency programs have in regards to the issue of retention of underrepresented groups?” as well as “Are there any learned lessons from an approach that had an unintended impact?” These questions generated much discussion and are areas in which the Residency Interest Group hopes to see continued growth and shifting practices toward increased inclusivity and awareness of impact.

I can confidently say, almost three months later, that IDEAL ‘19 was one of the best conferences I’ve ever attended. Each session I attended was thoughtfully crafted, and attendees seemed ready to move beyond conversations of why Diversity, Equity, Inclusion, and Accessibility are important, and more toward answering how current practices can be improved. The opening keynote by Kimberlé Crenshaw on intersectionality, framed the goals of the conference while the keynote by Nikole Hannah-Jones closed the conference on the powerful note of continual education and understanding of the Black experience in America.

I look forward to the next IDEAL conference and in the meantime, continuing these conversations in my own institution.