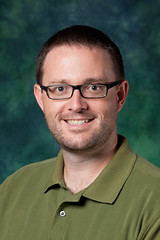 Mark E. Phillips, associate dean for digital libraries at the University of North Texas (UNT), has been named the 2021 recipient of the Hugh C. Atkinson Memorial Award. Phillips will receive a cash award and plaque and will be recognized at a virtual event hosted by the American Library Association’s Core: Leadership, Infrastructure, Futures division later this year.

“The award committee selected Mark Phillips for the Hugh C. Atkinson Memorial Award from a strong group of nominations,” said Dale Poulter, Hugh C. Atkinson Memorial Award committee chair and director of library technology and digital services at Vanderbilt University. “Mark has worked in libraries for more than 15 years. His work in the area of web archiving continues to provide access to government information long after the original websites are no longer available. As Mark has developed digital library infrastructure, he has continued to share the innovations through open-source software.”

Phillips is the architect of the UNT Libraries digital libraries’ infrastructure, which includes the UNT Digital Library, the Portal to Texas History, and the Gateway to Oklahoma History. The digitized contents in these platforms – about 3.4 million digital objects – are freely available to the public and have been accessed more than 144 million times since coming online. As his nominator notes, “These systems are seen as exemplars, and Mark shares his expertise in these areas widely with the library community through his personal blog, publications, and many papers presented both nationally and internationally.”

Phillips received his B.M. in Music Performance from Oklahoma City University along with his M.L.S. and Ph.D. in Information Science from the University of North Texas.

The Hugh C. Atkinson Award is jointly sponsored by two divisions of the American Library Association: the Association of College and Research Libraries (ACRL) and Core: Leadership, Infrastructure, Futures. The award is funded from an endowment established to honor Hugh C. Atkinson.

For more information regarding the Hugh C. Atkinson Memorial Award, or a complete list of past recipients, please visit the awards section of the ACRL website.

About ACRL
The Association of College & Research Libraries (ACRL) is the higher education association for academic libraries and library workers. Representing nearly 10,000 individuals and libraries, ACRL (a division of the American Library Association) develops programs, products, and services to help those working in academic and research libraries learn, innovate, and lead within the academic community. Founded in 1940, ACRL is committed to advancing learning, transforming scholarship, and creating diverse and inclusive communities. Find ACRL on the web, Facebook, Twitter, Instagram, and YouTube.

About Core
Core: Leadership, Infrastructure, Futures is a new division of ALA. Its mission is to cultivate and amplify the collective expertise of library workers in core functions through community building, advocacy, and learning.